Ask anyone what image comes to mind when you think of Chinese culture and most people will say the dragon.

But what’s the background to this symbol and what does it actually mean?

A benevolent beast not a monster

You’ll be pleased to know that the Chinese dragon is a beneficial creature, definitely not the monster of mediaeval Europe or Tolkien’s tales.

Since ancient times the dragon was a deity symbolic of fertile rain. As a water god he soars into the clouds and pours out his blessings on the parched earth. Therefore his aid is sought in times of drought. It is a beneficent animal. By controlling the rain he holds in his power prosperity and peace.

The dragon’s powers aligned with the emperor’s right to rule as mandated by heaven. No surprise then that the dragon became associated with the emperor. The dragon was the emblem of the first royal dynasty, the Xia who ruled China from the 3rd to 2nd centuries BCE.

From the Han dynasty 206 BCE – 220CE the dragon came to more closely represent the emperor himself and it is from this period that the five clawed dragon became the provenance of the emperor alone while four clawed dragons were used in other representations. This entitlement continued until the end of dynastic rule in 1911.

A symbol for the people

The dragon was not just for the ruling class; other people also enjoyed its influence and protection giving hope to all.

By itself the dragon as a representative of the emperor is a symbol of power and authority.

More importantly, it’s a symbol of hope and perseverance but to understand this we need to tell a story.

According to Chinese mythology, the Dragon’s Gate is located at the top of a waterfall cascading from a legendary mountain. Many carp swim upstream against the river’s strong current, but few are capable or brave enough for the final leap over the waterfall. If a carp successfully makes the jump, it is transformed into a powerful dragon.

The image of a carp jumping over Dragon’s Gate is an old and enduring Chinese cultural symbol for courage, perseverance, and accomplishment. The expression, Liyu tiao Longmen, which literally means carp jumping over the Dragon Gate was a metaphor for a person’s success in passing very difficult imperial examinations.

Even now when a student passes the rigorous national university examinations in China, friends and family proudly refer to the student as “Liyu tiao Longmen.” 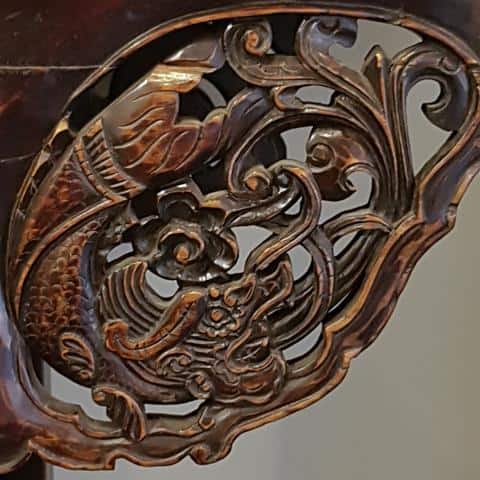 On the Yellow River at Hunan Province, there is a waterfall called Dragon Gate. Every Spring carp swim up from the sea and gather in vast numbers in the pool at the foot of the falls. It is said that those who climb the cataract will turn into dragons.

Hunan is not the only place where this happens. Many other waterfalls in China also have the name Dragon Gate and much the same is said about them.

You’ll often see two dragons facing each other and this is a symbol of a happy reunion between friends.

The dragon is a very popular motif that you’ll see on furniture, art and porcelain. Now you have a bit more understanding about its history you’ll be able to appreciate it just that little bit more.