Lacquer, in Chinese called da qi, originated in China. The earliest lacquer bowl dates from the Hemudu culture in Zhejiang province and is approximately 7000 years old.

Lacquer is not to be confused with traditional European shellac, a resin excreted from the lac beetle. Lacquer is derived from the sap of a species of tree indigenous to China and some south-east Asian countries. The fresh sap collected from the lacquer trees is a greyish-white colour. Traditionally the lacquer is formed by filtering, stirring and airing the sap in a warm and humid environment. When the sap is purified and turns a reddish-brown colour the lacquer is ready to use.

Lacquer has such versatility that it can be applied to almost any material including pottery, bamboo, wood, leather, linen and metal. Once applied, the lacquer slowly sets by a process of oxidation and polymerisation rather than evaporation alone.  When fully dried lacquer is non-toxic, moisture-proof, heat tolerant and acid and alkali resistant.

It is these properties that see lacquered items lasting hundreds and even thousands of years.

Most Chinese furniture was lacquered because it helped preserve the timber and enhanced its aesthetic appeal. The natural reddish-brown lacquer was commonly used. More frequently, however, plant and mineral pigments were added to achieve more vibrant colours including plum red, scarlet and velvet black.  Gold leaf was employed to highlight paintings and carved motifs on prized items.

Aged lacquer has fine creases on the surface as a result of oxidization over a long period of time. 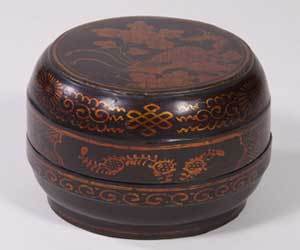 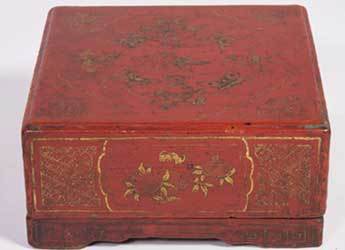