The earliest forms of storage were small boxes and over the centuries these evolved to larger chests. The basic form of the chest probably continued until the advent of the chair level of living when the raised lifestyle saw the introduction of cabinets and allowed for different ways to store articles. Because of their usefulness, boxes of different sizes were used throughout history. Larger chests were made to hold linen, quilts and clothing. Timber such as camphorwood was a favoured material because it repelled insects but elm and fruit tree timbers were also widely used.  Many of the larger chests have a built-in base to protect the contents from damp. Often these chests have carvings or paintings or a combination of the two.

It was during the Ming dynasty (1368A.D. – 1644A.D.) that furniture making reached its peak in terms of design. The tapered linen cabinet is one of the most representative pieces of that era and remained popular through to modern times. The top to bottom taper of the frame members is subtle and gives a sense of the cabinet reaching to the sky. Many consider that the best pieces are those with full length doors as the eye takes in the long lines of the piece. Undecorated, they represent the simplicity that has come to be recognised as the best of Ming furniture. 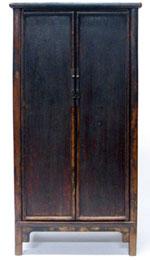 Much of early period furniture was lacquered. In fact it is thought that it was not until the mid to late Ming dynasty when hardwoods with fine grain were imported was furniture left unlacquered. Aesthetically pleasing, the lacquering process also helped to preserve the furniture. One process was to lay linen on the furniture and then coat this with a mixture of very fine clay with natural adhesive. Once dry the surface was then lacquered with several coats. Colloquially known as ‘pi hui’ which means coated clay, the result was a very hard surface that provided excellent protection for the furniture and helped to ensure its survival over the centuries. Another method was to lacquer the timber surface directly, the most favoured colours being traditional black and red. The plum red colours seen on 19th and 20th century furniture indicate the popularity of these tonings.

The lacquer also provided an excellent surface for painting. The scenes varied widely including landscapes and figures. Others were decorated with plants, animals and other objects. The painting was not just decorative but highly symbolic. The motifs represented wishes that included a long, prosperous life filled with success and children. For this reason lacquered and painted furniture was often presented as a wedding gift. 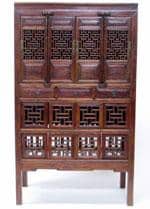 Another popular form of storage were the so-called kitchen cabinets which came in a number of different styles. The most easily recognised are those with lattice doors which were designed to facilitate air circulation. Cooked food could be placed in the cabinet and the steam could escape through the doors. Most of these cabinets also had bottom lattice shelves to store kitchen utensils.

Some kitchen cabinets are more ornate. The doors have open or relief carving of people, flowers and other auspicious motifs. The upper doors often have a panel on the inside that can be raised or lowered to either prevent or allow air to circulate. 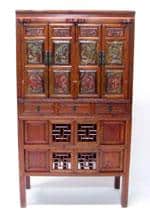 Long cabinets, often called by the western term of sideboard, were more often used as altars in the traditional family home to hold the ancestral shrine or tablet or as a place of observance for other deities. The cabinet would not be restricted to this purpose however and would have been used to store other household or personal items.

Chinese medicine dates back thousands of years when natural products were used to treat illness. During the Tang dynasty (618A.D. – 906A.D.) around 700 plants were used to treat illness. By the Ming dynasty this had risen to about 2000 and doctors today use nearly 6000 herbs to treat a wide range of disorders. The herb cabinet was designed to store therapeutic medicines. The cabinets were made from timbers that would not react with the herbs they contained. Therefore herb cabinets were never made from timbers such as camphorwood as it was known it would cause a harmful reaction with other plants. Each drawer has a number of compartments which both maximises storage and keeps the herbs separate from each other to prevent reactions between the plants. 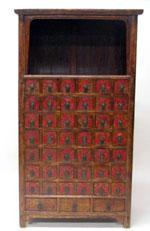