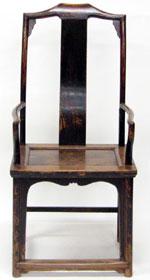 China was the only east Asian country to adopt the chair as the major form of seating until modern times. The seat came to China from other countries about two thousand years ago and over the following thousand years was adopted and adapted.

The best known chair is called “guanmaoyi” or the Official’s hat chair, so named because the crest rail resembles the hat tails of Song dynasty officials. This is more apparent in chairs where the crest rail extends beyond the rear supporting rails.

Official hat chairs vary slightly in size. Some are tall and grand in appearance and were more likely to be found in the main hall where the senior members of the house sat to receive guests. The slightly smaller chairs were placed around the house and used by family and friends.

The official’s hat chair which has the crest rail and arms extending past the supporting posts is also called “sichutou” meaning chair with four protruding ends. They are also called yokeback armchairs.

On formal occasions official hat chairs were draped with narrow silk runners while the person seated would wear their best robes to give the best impression of their wealth and status. 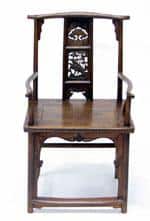 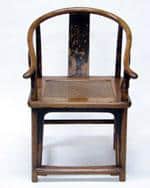 The most striking feature of the chair is the U-shaped crest rail that also forms the arms. Usually it is made of several sections secured by a tapered peg joint.

The chair was favoured by scholars and officials, especially in the warmer months as the chair arms naturally raised their own limbs away from the body allowing the flow of air. They are especially comfortable for those contemplative moods.

The side chair is similar to the official hat chair except that it has no arms. This design made them popular at banquets and being light in weight meant they could be easily moved around the house. The yoke-shaped crest rail has led to some calling them “yokeback” chairs. Others see the crest rail extending beyond the support and call them “hanging lantern” chairs. The majority of these chairs are very simple in design and have little decoration.

The curved back splat makes them especially comfortable.

Low back arm chairs are more familiarly called “meiguiyi” meaning rose chair although the reason for this name has been lost. The chair is also called “wenyi” meaning writing chair and in the 1930’s the chair was called “meirenyi” or beauty’s chair suggesting it was mainly used by women.

The earliest record of this type of chair dates to the Song dynasty. Smaller than other chairs, they have a straight low back and straight arms. They were often used as sedan chairs especially when they were made from bamboo. In fact it is thought that until the Ming dynasty these chairs were only made from bamboo.